A mix of 6 different sundews selected from the listing above.  Temperate sundews in their dormant season, will be shipped as dormant hibernacula.  Juvenile plants may be shipped.

Species and cultivars may vary, but will all be different.

I never knew I would get into bog plants, it’s been a wonderful discovery for me

I received my sundews about a month ago, and I chose to order the set as a starter to the drosera species. Despite spending a weekend at the post office through no fault of the nursery, the plants came in excellent condition. Within about two days of being in an aquarium, I was already seeing new growth in the ones I chose to place there. They came with tips and the website gives great care instructions, you’re even emailed in advanced with care help to get you started. I was excited to receive all of the ones I had hoped for! Now after a month, the intermedia has two flower stalks and everyone is growing better than I would have imagined. Several even had several plants growing within the soil/moss, and unfortunately the spatulata is the only one not doing well even though it was the one I wanted the most. This may, however, be my fault, as it was a clump of five or so plants, and I was nervous to separate the smallest ones, and two were fairly big so they may have choked each other out some? I separated them to see if they recover. All in all, an amazing purchase and well worth the money as long as you research and look into what types of care they need.

It was a nice mixture of sundews. They came in bare-root and healthy. I planted them immediately and they are growing great. 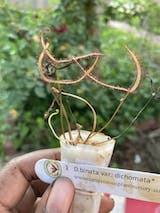 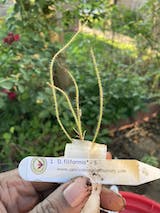 These little plants are fascinating! I bought them as a part of a strategy to combat fungus gnats attacking one of my succulents. Now I love the Sundews even more than I love the succulents. Shipping was quick. The set arrived carefully packaged, each plant rolled in wet moss. I live in a cold climate so I also had the heat pack added for shipping, which was still warm upon arrival. I potted the plants up using the bog mix (one bag was plenty) and kept them well watered. Some of the plants in the set were significantly bigger than others. The three biggest snagged gnats within days! The smallest plants needed a couple of weeks to go from a little brown starter to adorable little plants. They are well on their way now. Every plant in the set is thriving. I like that there was a size variety in the set as it is interesting to see how the smaller plant are developing through the growth cycle. I am very happy with the quality of Carnivorous Plant Nursery’s plants and bog mix. Thanks for great service and great plants!