Drosera intermedia or Oblong-leaved Sundew is sometimes called the Water Sundew, and for good reason. It loves extremely wet, saturated boggy conditions, often growing on floating mats, where it can grow its largest, 3+". It can tolerate long periods of submergence and will tolerate drier periods in the summer months. It is medium height with a dazzling display of glistening tentacles in full sun, giving it a silvery appearance. The spatula-shaped leaves are green with bright red tentacles. It emerges early in the Spring and lasts throughout the Summer and Fall. It forms a sturdy winter hibernacula (resting bud), which is best pushed down to the surface in early Spring for best growth. The small flowers are white with a tint of pink on scapes with multiple blossoms. It flowers from June to August and often forms young plantlets on the flower spike (false vivipary). Oblong-leaved, water sundew frequently produce abundant seeds, giving it a nice spreading habit. Seeds need to be stratified (cold, damp winter storage), and can be stored for several years. It is wide-spread, growing from Canada to the Caribbean, where varieties do not require dormancy. Drosera intermedia is a trooper, and a great companion in the collection or growing in the bog garden. This selection comes from seed, and will show some natural variations.  In it's dormant season, it will be shipped as a dormant hibernaculum. For maximum effect use multiple plants in a 6" pot.

Plants shipped bare-root, wrapped in sphagnum moss. In their dormant season, they will be shipped as dormant hibernacula. Photographs are representative of the species and not the Dorsera intermedia for sale.

It arrived in great time and was lovely, but started turning black after two weeks. I added it to an open terrarium with a couple other plants. I can’t tell if it’s dead or if it got stressed because of a change in environment? 🤷🏻‍♀️

Very interesting. Moment I repotted the plant and put on a sunny window sill she started to grow very fast. Went from two buds to 17. That is fast.

I received this one and some other plants well packed and hydrated. After 2 weeks this is coming along fine and is showing of new growth. 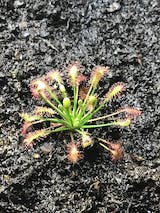 The owner is so helpful, and the care and attention paid to shipping the plants was stellar. 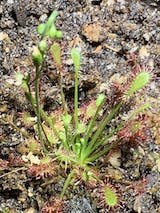